One Nation Under Inspiration 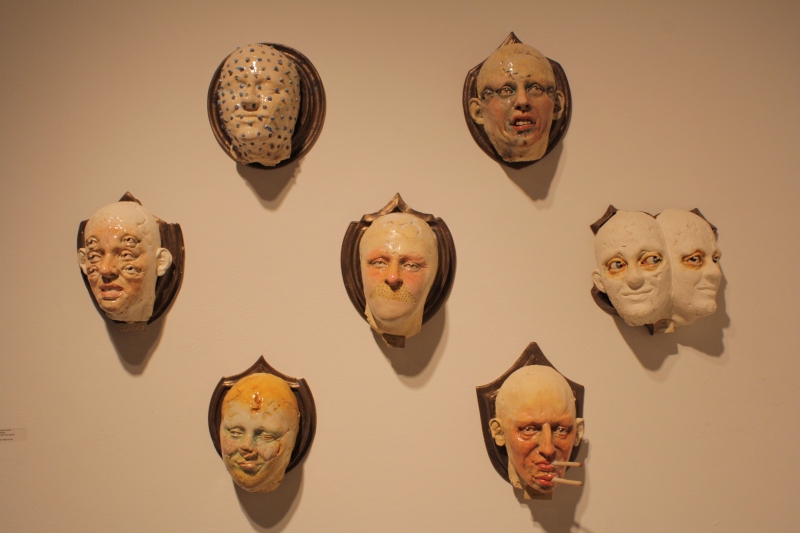 The Second Year Graduate exhibition at the Ohio University art gallery is a melange of media – sculpture, video, performance, and more traditional artforms as well. I found the odd eclecticism of it fascinating and was impressed with how well the astronomically different pieces and ideas meshed together into one collection. 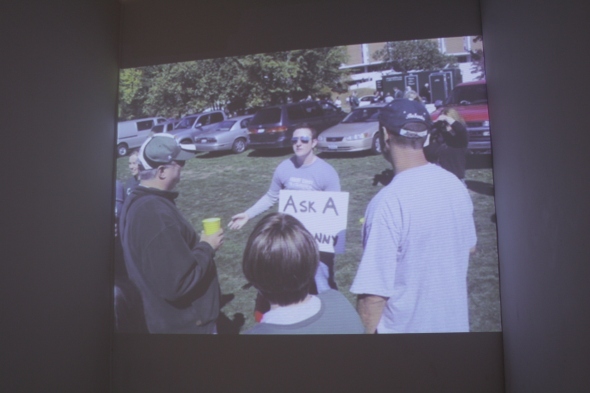 Though I previously stated that performance art was not my “cup of tea,” Kris Grey’s “Ask a Tranny” had a very endearing  and honest quality to it that kept me captivated in the dark back corner of the gallery for quite some time. The idea of the performance was very clear and concise, but was, no doubt, very tricky to pull off. The comments and remarks made were sometimes funny, sometimes uncomfortable to hear, but the way in which Grey handled them was very professional. I actually witnessed this piece being performed and did not realize I would see the final product three months later. It’s interesting to compare the taped reactions with what I remember of those that were around me at the time who didn’t care to approach Grey. I think the piece speaks universally. 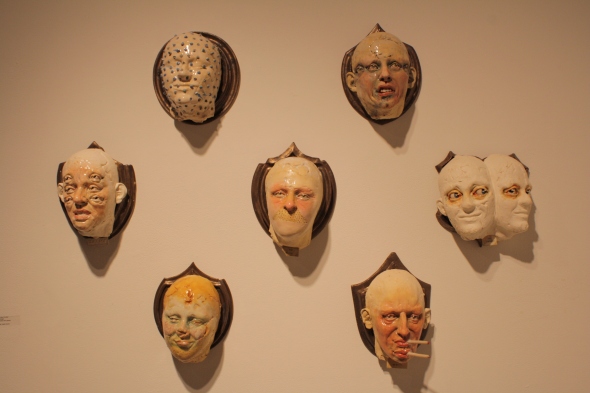 "I am a Head Hunter" by Paige Wright

Call it cheating or playing favorites, but I really love Paige’s work. I’m familiar with it after having taken her drawing class this past quarter. Our final project was actually modeled after “Paul’s Pillow,” which wasn’t completely finished at the time. So it’s nice to have seen a bit of the “behind the scenes” of this piece (considering my interest in “Ask a Tranny,” as well, I think I have a thing for seeing the whole process of a work – I want to fully understand!). Have you ever tried drawing yo’ face on a pillow??

Though I don’t know the back story behind “I am a Head Hunter,” I find it interesting that each head subtly resembles Paige. We did a lot of portraiture in our drawing class and she told us most of her work was modeled after herself (not due to narcissism, but convenience rather… because your face is just always… there. go grab a mirror – you don’t need no stinkin’ model!), so we had to learn and study our own faces. It’s obvious that the mastery of the self-portrait is incredibly important to her, a fact that’s subtly evident, though not strikingly apparent in her artwork. Besides the whole familiarity aspect, the craft in general is spectacular. The pieces have this gruesome but whimsy quality to them – colorful and playful, but also grotesque and deformed. The play between the two polar-opposite characteristics really makes for an interesting contrast.

It’s a well-made piece, but as I’ve said before, minimalism isn’t my thing… though one could argue, “How complicated can you really get with a ‘tray?’ ” I wouldn’t particularly want to serve food on it, especially after it’s been in an art gallery. So I guess I’m just unclear about it’s ultimate purpose.

And finally, you’ll have to forgive me, as I forgot to write down the title and artist… But I was not so much a fan of the Jell-O piece. The intricacy of the sugar and velum is fantastically detailed, but I found the over-all quality to be a bit… haphazard. With the added Valentine aesthetic overload, I can almost feel the sickly sweet stomach ache from having eaten too many conversation hearts. The placement choice was really odd for me as well… It looks as if it’s been trampled over in some places. : ( 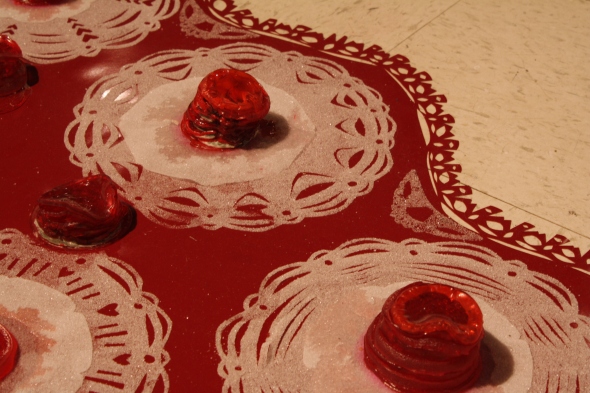 31 Jan This entry was published on January 31, 2011 at 4:03 pm and is filed under Uncategorized. Bookmark the permalink. Follow any comments here with the RSS feed for this post.

One thought on “respect your elders”